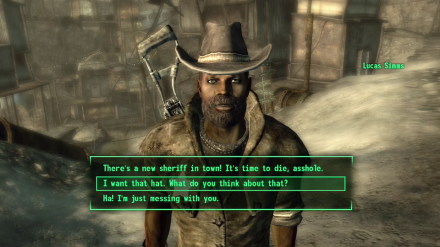 In Western game studies, we are seeing an emergence of a “canon”, games which scholars consider to to be essential playing for understanding the medium. But is this really the case, and are these games worthy of canon? Sure, people will always write about the latest games to keep up with the trend but in academia, are seeing a prominence of certain games written and presented on in the last few years. Social games (World of Warcraft, Second Life…) and e-sports games (Starcraft, League of Legends) aside, it is often Western RPGs which become objects of close reading.  Popular series’ such as Bioshock and Assassin’s Creed along with Bioware and Bethesda’s newer games are mainstays of the field, but why?

I’d like to think there is a Hollywood blockbuster style to these games, not that they are terrible games, but that they contain the qualities of widely-appealing summer films. These games have mastered a formula for success and have since repeated in said fashion to create a franchise and a brand for their development studio. And yes, while indie games such as Gone Home have also garnered much scholarly attention, they (along with many Japanese games) are the niche, dropping in and out of the spotlight. Now, I’m not talking about the wide-appeal of casual games like Farmville and Angry Birds;these games have their own market and again, would fall under the discussion of niches in terms of the gaming world. However these Blockbuster games have staying power, a palatable range of play-styles, iconic moments and quotes along with a potential for that magic completion time of 15-20 hours. Character creation in several of these games helps too.

Yet, when closely examining the narrative or even technical polish of these games, I find them to be quite lacking. Just the same as it’s film counterparts, script often goes by the wayside in favor of action. The Spoiler Warning team does an excellent job of breaking down playthroughs of several blockbuster games through a critical lens (something I hope to start on my own Twitch channel). One of the members, Shamus Young has also begun a write-up specifically for Fallout 3 in the wake of hype for the Fallout 4 announcement. I would like to learn more about the development process for these games. How much attention and time is spent on the writing process? Is continuity between sequels a concern? Considering most of these games are sold based on mechanics, and not interesting characters and storylines, probably not a lot.

Are there Oscar-equivalent titles? Sure there might be, although “Game of the Year” has almost become pointless title with the past few years having little consensus over which game is most deserving (many game sites refusing to even bother with the charade anymore). The label is less politically charged, but many have an idea of what they consider the “perfect” game is. Do Blockbuster titles make these lists? Sure, but so do the Dark Knight’s and the Django‘s of the film world.