Hey blogosphere, been a long time! I’ve been studying for my comprehensive exams and honestly miss the feeling of low stakes writing and something I highly recommend doing when one is immersed in a lot of reading. Let’s be honest, PhD students have to do a whole lot of writing after comps (a dissertation or something) and it just makes sense to keep up the habit now.

Nonetheless, I’ve been thinking a lot about figure collecting.

I’ve been an avid collector of video game and anime figures for many years now often picking up ones of characters I’ve cosplayed (if available) or of some of my other favourite characters.  I’ve even found a community of collectors at my institution since the amiibo craze started. We even recorded a podcast about the state of amiibo collecting and supplies (before the restocks). Now, I’m the type of person that after playing a game, will search online for figures of newly beloved characters. Most recently for me this has been Dragon Age: Inquisition and I was sure to find some figures easily online after all, Mass Effect has several lines of figures including these super adorable bishoujo figures of Shep and Liara: 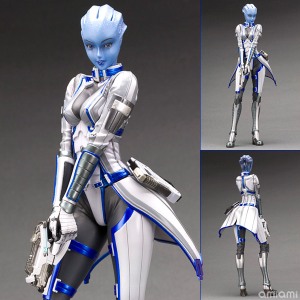 Or the PlayArts line including everyone’s favourite Garrus:

Along with these examples are the more “luxurious” statues offered on the Bioware store and a slew of Funkos which are steadily becoming my go-to for cute cheap figures. But despite all this, there seems to be very little in the way of Dragon Age figures that are not pricey statues. This appears to be because the Dragon Age figure license is owned by this company called Titan. Now you are probably wondering how this could be when I just linked you to two non-Titan places that sell Dragon Age figures. My guess is that Titan’s license includes making Funko-like Dragon Age figures but instead of cute large, round headed darlings like this: 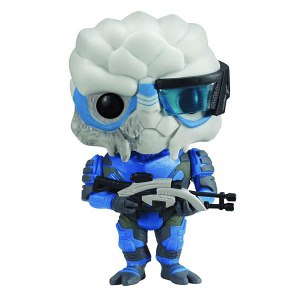 We get what appears to be made in a factory of demons, hell bent on making every fan recoil in terror and disgust at their products: 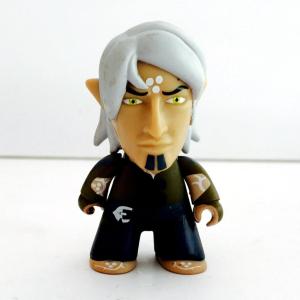 The head shape is weird, the markings are all wrong, his hands are those that a Lego person would have and he has the stubbiest legs an elf could ever have. Nothing is really right about this figure at all. It’s unsettling and fans deserve better. To search for answers, I found this excellent blog post about the difference between Japanese and Western figures and to no surprise with this example, Japan has the West beat. It’s not only the quality of the figures but the availability of figures designed for female fans. Although Western game companies are starting to cater their merchandise more towards their female fans (Bioware and Blizzard most notably), there is still much more to be done in the way of figures. It doesn’t take much searching to discover that there are some fan favourites in Bioware games, including romance-able characters like Fenris that have almost no merchandising for them. It’s not just about catering to fans of their in-game crushes, but also recognizing that these fan exists and want to participate in the culture of figure collecting. The sexiest female characters are always one the first to be turned into a figure and secondary to that are female characters sexualized for no reason, other than to be semi-pornographic fodder for male fans. And that linked example is the only available figure I could find for that character. I’m counting the days when we see Fenris immortalized in such a style. We also know how well plushies sell; make an Iron Bull plushie and I’ll buy five! Hey Titan, you might actually make some good money in the process!